I hate it when someone in the media, another advisor or worse a “financial entertainer”, bashes a product or product line.  The bashing is usually with complete ignorance.  Here in, “Variable annuities exposed” – we are using real world cases, not emotion and false information

What I am about to share with you about variable annuities is true, real world products and what real people have been exposed to.

Many people talk about fees in variable annuities being high – they can be.  There is variable one that only has a flat $20 per month fee.  That is very affordable compared to the the majority that charge 1-5% in various fees.  Fees that are often not known by the owner of the annuity.  To be clear – I won’t sell variable annuities. 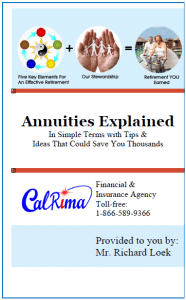 Here are cases with real people behind them:

A client inherited 1/3 of her father’s annuity.  The registered representative (stock broker) helped two of the siblings.  With one sibling he sold an income rider with a variable annuity.  The income rider stopped growing the moment a withdrawal was taken.  Inherited IRA’s have a required distribution every year.  At the very most, the annuity’s income rider would have been inforce for one year.  I can’t make this stuff up – it is real

The same representative sold the other sibling a new variable annuity – she wanted to keep the old annuity, which was an option.  However, if she kept the old annuity the stock broker would have made zero money, I’m just saying…  Now the money was locked up for a new surrender charge period, shy of the minimum withdrawal.

He also sold the second sibling a new variable annuity for her IRA.  The issue here was that every time she added money to the contract the surrender penalty reset.  This means that it is 5-7 years from the last deposit before she can move her money to some place useful.

variable annuities exposed – sold to benefit the stock broker, an income rider was useless one year later and had to be paid for.

We asked a couple of key questions of the company about fees.  We then dove into how the product works.  After a few minutes of talking with the representative from the annuity company we all, including the representative, realized that the annuity will run out of money in 15 years.  We then dove into the second annuity with the same company.  Well, this one is not much better.  It runs out of money in 15.4 years.  My heart dropped.  My eyes water even to think about this case.

We again put the company on the phone.  We asked a few questions about the product, what are the guarantees and how do the riders work.  This was turning out pretty great!  Yep, lifetime income – whew!  Then the insurance company person says, “well, let me see, it is lifetime income if you start income at age 65 or later and you started at age 64.  This will provide income for only 20 years!”

Foiled again – this was not good news.  We were shocked!  The client’s comment was, “well, I guess I need to die before I run out of money!”

This was actually a 457 plan, which is like an IRA or 401k.  This company has a fixed income account which is making 3% and will never be less.  This is a good thing for her.  The money is liquid, which means that any time she could have the money if she needed or wanted it.  GREAT NEWS FINALLY!

We did not leave her hanging on the vine to dry.  After she visited with the stock broker (works at a bank – beware) who had sold her these products and CONFIRMED all that we had heard from the companies – he told her, “we will have to see how it goes…”  She came back to us, mad and upset at him, “See how it goes!”, she said!

We made some adjustments, slowed the income and managed to keep her life style somewhat intact.  The funds will now last many more years.  Still not income for life across the policies but not a huge surprise at age 85!

variable annuities exposed – the stock broker was caught…off guard.  Did not know how to respond.  Stock broker told the client these were all income for life and they are not.  His bad advise made her life head for the financial cliff – when she could do nothing about it.

A married couple comes into the office.  They were referred by another advisor who could not help them.  They have enough assets and pensions and such.  They also have variable annuities holding the bulk of their life savings.

I put the various insurance companies on the phone and found out all of the details.  One company was pretty good to them.  With the next company they had two different products.  One contract the benefits of the income rider they had been paying for stopped after only two distributions.  Be those distributions required by the government or not!  OUCH – paying for a rider and it fails after you take two distributions.

Well, when people figure out that the advisor who sold them a product neglected to tell them the downside, they are very pleased to hire me to manage their money.  We now manage 100% of this couple’s assets.

variable annuities exposed – I guess it was not that important to tell the client about all of the bad stuff.  They, the clients, will likely never figure it out if they *stay* with the original advisor.

A Doctor and his wife have been working with a stock broker for 30 years.  They are now wanting to retire and thought they should shop around.  We did our entry level analysis ($700 as of April 2013).  The analysis showed that they had in the area of 90% of their assets fully invested in risky investments.  Keep in mind, they were positioned conservatively.  The point here is that the holdings they had will all shrink or “correct” when the stock market goes down.  Not good when you don’t have enough of a life savings to fully retire.

Our proposal included evaluating the variable annuity they had.

The insurance company was great.  They told us about the product and the fees.  The fees were about 4% per year and that included a rider fee for lifetime income.  Then we started asking about required distributions.  The product was great – dollar-for-dollar is how the money would be taken out.  That is when you take one dollar from the cash value the income value only goes down by one dollar.

Then the company’s representative volunteers that there is a 10% penalty free withdrawal on the product.  Okay, that is standard.  I then ask about how that 10% withdrawal impacts the income rider…  Did I stumble on something here.  The client can only take the required distribution without messing up the income rider.

The income rider resets when you take one penny more than the required minimum distribution.  OUCH!

variable annuities exposed – Thirty year relationship is tossed out for a bad annuity?

Real world situations can be quite eye-opening experiences.

Questions abound – should we replace these bad products?  We take careful steps to analyze each and every variable annuity that comes to us.  Sometimes we can make the situation better, sometimes we take over managing the annuity and sometimes we simply have to grab a box of tissues – nothing to do but comfort the person.